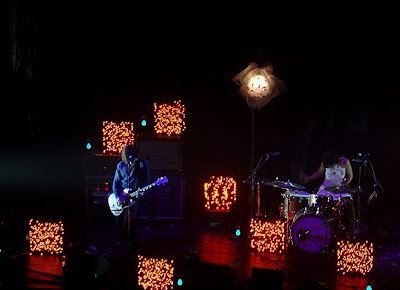 A few years ago, Autolux was the opener for a pair of infamous back-to-back Queens Of The Stone Age shows at The Wiltern. We here are no strangers to Autolux, having posted an headlining show of theirs at The Fonda a year ago. While my main motivation at the time of attending these shows was for QOTSA, I decided to record Autolux because I had seen them not that long ago opening for QOTSA and Nine Inch Nails, and were a bit familiar with them.

The setlist was pretty standard for an opening set - most of songs were culled from their debut (and only full-length) album Future Perfect. Only a couple of songs were not from the album, including "Reappearing" - which has been rumored to be on their long-delayed sophomore release Transit Transit

Alternatively, the QOTSA sets were re-posted to dimeadozen.org recently - they can be found here (12.19.05) and here (12.20.05) (both require registration to view and download)

Email ThisBlogThis!Share to TwitterShare to FacebookShare to Pinterest
Labels: Autolux, Queens Of The Stone Age, The Wiltern