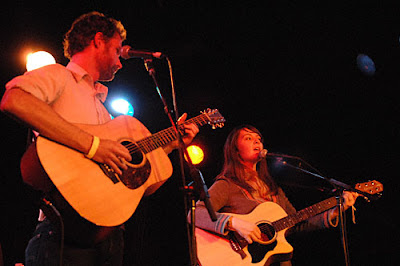 Awhile back, The Finches opened (along with Winter Flowers) for Lavender Diamond (fronted by Becky Stark, who is currently a part of The Living Sisters) at the now-departed and often-troubled Hollywood venue Safari Sam's. This Finches show was an older duo incarnation of the band with Aaron Morgan(who's founder/main member is Carolyn Pennypacker Riggs). The Finches have undergone changes in their member line-up since then (and even briefly changed their name to PALMS), so this performance serves as an earlier example of the band.

We first heard of The Finches a few months prior in October at the 2006 Eagle Rock Music Festival. They were on the bill before perennial blog favorite Jesca Hoop (if so inclined, that performance can be downloaded here), so we happened to catch them and quite enjoyed their American folk pop-style music. Fortunately enough, we were able to catch them at this Safari Sam's show a few months later, which was also a good performance. We hope to eventually see them again in the near future.