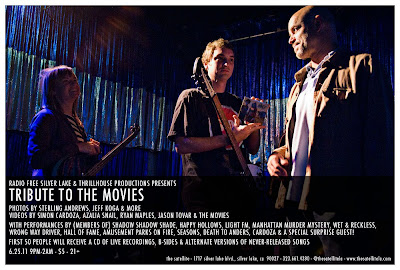 A few weeks ago (yes, I know, it's been awhile since the last post here - blame it on a combination of being sick/procrastination) "Tribute to The Movies" took place at The Satellite in Los Angeles. Several bands and artists came together to pay tribute to the now-defunct Los Angeles-based band The Movies. While our experiences with The Movies have been limited (we saw frontman Timothy James do a solo set over two years ago) they have been described as "legendary in Los Angeles" and "entirely idealized—purported to be larger than life." Regardless, it was a very emotional evening.

Due to the, er, boisterous nature of this event, this was a challenging show to record. Each band/artist was recorded and mastered separately (with fade ins and outs applied between each "set") - thus, sound levels will vary. The beginning of "Truth Knocking" was cut due to one of the night's performers who shall remain nameless whispering in my left ear. Approximately 14 seconds of "Get Your Macho Out" was cut due an audience member telling me, and I quote "The majority of those musicians on stage are completely unprofessional - why aren't you up there with them?" (yes, this really happened)

Death To Anders
1.) Rock in the Slingshot MP3

"Encore Jam" (w/various performers of the night, plus guest vocalist Seamus Simpson of Smokers In Love)
24.) Get Your Macho Out MP3
25.) Scary Footsteps MP3