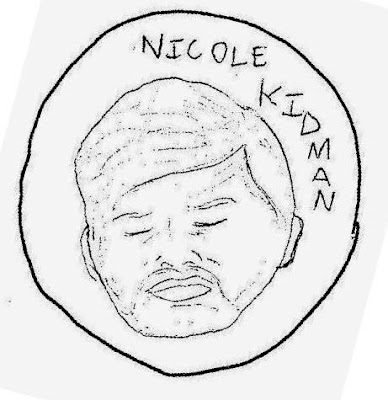 (Disclaimer: This post is not affiliated with the Australian actress or any other persons named "Nicole Kidman"*)

The weekend before last, Nicole Kidman played at Ema and the Ghost's birthday show, which also included Black Nile and Your Mom/Your Dad (aka The Monolators). Nicole Kidman is the moniker of Jon Barba, who has been described as a musician that "makes gritty, confessional electro-pop that sounds like he spent the last five years in his mom’s basement hunched over a keyboard, wallowing in laments of unrequited love." The 704 had a take on his music that I can concur with as well : "With his preset beats and his simple yet adept keyboard playing, he sang some of the most bluntly, nakedly confessional songs you'll ever hear, all in a high voice that sounded like it was a breath or two away from giving up and going home. From what I could tell, his songs were about exactly what they sounded like they were about--he opts for cutting truth over airy abstraction--but he'd occasionally hit on a phrase of such shattered perfection that you could only call it poetry." Like the artist said in his live performance, his "music isn't for everyone," but it's definitely worth a listen.

*The disclaimer is half-serious/half tongue-in-cheek. In today's world, one must try to keep all their bases covered.

Email ThisBlogThis!Share to TwitterShare to FacebookShare to Pinterest
Labels: Black Nile, Ema and the Ghosts, Nicole Kidman, Pehrspace, The Monolators, Your Mom/Your Dad