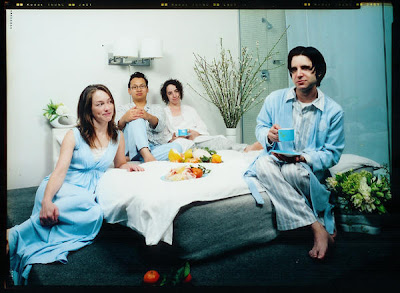 (Part one in a series of three)

Bedroom Walls today may or may not be playing as another band, who may or may not have recently released their first record. To celebrate this, I will be taking a look back at some older shows of theirs.*

I first heard of Bedroom Walls sometime in 2005, online. My first thought was that I liked the name, which could be construed as superficial, I suppose. But I did like the music, which has been described as part of the "romanticore" genre, though "indie-shoegaze-pop" could apply as well.

I didn't get to see Bedroom Walls until this show in 2006, at the now departed Tangier Restaurant and Lounge. This was announced as a kind of a "secret, last-minute" show - the crowd was small, but the sound is good. However, I apologize for not knowing the names of tracks 2 and 7 - if anyone knows them, drop me a line, thanks.

(Note: When "The Idiot" song was played live, it was called "Everybody Here Thinks It's Ridiculous"; later it was posted on myspace as "The Idiot." Unless notified otherwise, I'm going with the latter title at the present time.)