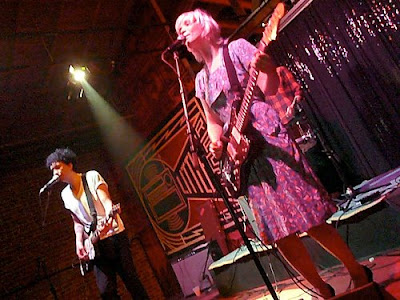 Another one from the archives, and a companion to the previously posted show from The Fonda in January. However, this particular Raveonettes show is a little different - it was part of their mini "electric duo" west coast tour in the summer of 2007. This tour had a bit of a quasi-acoustic bent to it, as it mostly Sune and Sharon only playing. (except for a few songs that had Midnight Movie's Sandra Vu on drums - well, for the L.A. shows at least if I remember correctly)

Since this was also a club tour of sorts, it afforded an opportunity to see The Raveonettes in more intimate venues than they usually played (at this time, they did shows at Spaceland and The Echo as well, which I unfortunately missed) and the Little Radio Warehouse was no exception. Every year during the summer months, this venue does every Sunday something called "Summercamp," which is late morning to early evening party that has (indoors) live music and (outdoors) a pool, waterside, DJ's, canopys, lawn chairs, food, and free-flowing alchohol.

This show features a couple of interesting covers - "Everyday" (Buddy Holly) and "100%" (Sonic Youth) The former was the perfect fit with The Raveonettes signature, fuzzed out sound. Also showcased was a preview of several tunes from their last album "Lust Lust Lust," which had yet to be released at the time.

Recording came out well, even though I was worried that the venue was on the boomy side. Their was some more background chatter than I like, but that's the way these things go.

P.S. If anyone knows of an active Raveonettes forum/message board/community, drop me a line. Thanks.