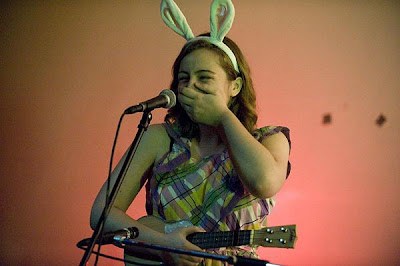 I first heard of Ema and the Ghosts on an artist list affiliated with a Dresden Doll's group called The Dirty Business Brigade back in 2007. It's weird, it sometimes seems like some roads to musicians lead through The Dresden Dolls - they're just that prevalent. Ha.

Anyway, I first saw Ema at Mr. T's Bowl in April of that year (only time I've ever been there, really need to go back) I later saw here a couple more times in '07, at Canoga Park venue The Verity Room and The Echo. This was the first show of hers I caught since then, and things have changed somewhat since then.

The set consisted of a lot of older material, but there was quite a difference in hearing these songs ("Ermine and Mink," "Alligator") in 2009 vs. 2007. I can't say exactly what, but it definitely was stronger. A new cover has been thrown in the mix (The Kinks "Victoria") and a couple of new songs ("Ice Cream"), one of which is so new it doesn't have a title yet - supposedly, it was only the 2nd live performance. (it was also played on the banjo - also a newer addition I think)

I must also note that the photo in this post wasn't taken this night - how it's related is that buttons were made with the image and given out at this show.

Like The Movies set from earlier in the night, this one came out pretty good as well, though there were a couple of technical issues during the show, which I tried to minimize as much as possible. Shouldn't be an problem though.

Email ThisBlogThis!Share to TwitterShare to FacebookShare to Pinterest
Labels: Ema and the Ghosts, Exposure, The Dresden Dolls, The Kinks, Where Gallery