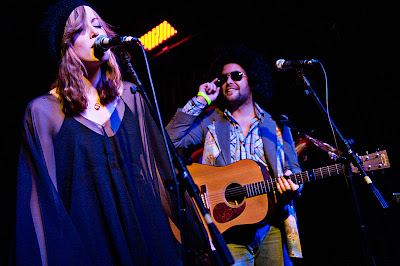 Last week, The Flying Tourbillon Orchestra performed a cover set of songs by Fleetwood Mac at The Echo, as part of a night featuring four different Los Angeles-based bands performing as different classic rock bands. In contrast, earlier this year we posted a set of cover songs of other bands of L.A. performed by this band (as part of Radio Free Silverlake's "Undercovered" night) Being somewhat familiar with most of Fleetwood Mac's greatest hits, I was curious to see how this would sound.

Their set did not disappoint - if anything, The Flying Tourbillon Orchestra's versions of these songs sounded better than the originals. Highlights were "Say You Love Me," "Rhiannon," and "Little Lies." The only song I wasn't familiar with was "Tusk," which was performed with a mini marching band/brass section.

Vocals were a little low in the mix, but don't let that stop you from downloading this show.