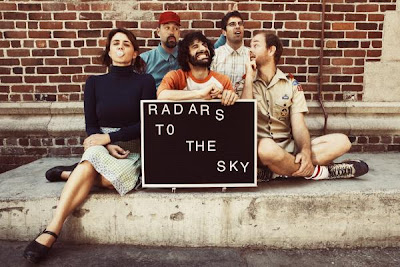 (Photo: Callie Giovanna via Radars to the Sky myspace)

Last Saturday, Radars to the Sky (along with previously-posted Seasons and Manhattan Murder Mystery) played as part of the line-up for this year's 12th annual Eagle Rock Music Festival. We are familiar with the band, having posted their set from last year's "Undercovered" show (and catching a couple of their performances around town in the past) - this is the first time we gotten a set with them playing their own material. Radars to the Sky are a band that "play a gritty brand of power-pop as fuzzy as it is catchy...balancing out lead singer Andrew Spitser's impassioned efforts is the sweeter sound of his wife Kate, whose cooing vocals give a much-needed cool-down to the band's heated sound."

This short set featured songs from their recently-released (and first) full length album Supra/Infra, along with a couple from their two older E.P.'s Big Bang and Debut. An excellent little set that left us wanting more. On that note however, Radars to the Sky do have the Monday night residency at Spaceland this month (as of this writing, remaining dates are the 11th, 18th, and 25th) - so, if you reside in the Los Angeles or surrounding area, I highly recommend checking them out.