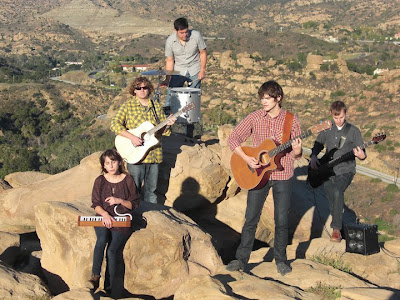 Last week, The Lonely Wild kicked off their month-long April "Radio Free Silverlake presents" Tuesday night residency at LaBrie's in Glendale. (you might remember that we previously posted the Radars To The Sky set from the same show a few days ago) This was the first time we've seen The Lonely Wild live, and it was certainly an interesting treat. The Lonely Wild is a relatively new band that has gotten quite a bit of positive press, ranging from having "expansive indie country songs have breathtakingly beautiful male-female harmonies that contrast with instrumentation that recalls desolate Morricone spaghetti western twang, then blooms into lush country soul orchestrations" and "impeccably sung, confusingly catchy, stirring, hypnotic American music."

Nowhere was their type of nouveau folk stylings evident than in tonight's setlist, of course. A few of songs were taken from their recently-released album Dead End. A clever cover of Bruce Springsteen's "Dancing In The Dark" was prominently featured as well. Great show, and we look forward to seeing them again in the future.

Email ThisBlogThis!Share to TwitterShare to FacebookShare to Pinterest
Labels: Bruce Springsteen, LaBrie's, Radars To The Sky, The Lonely Wild