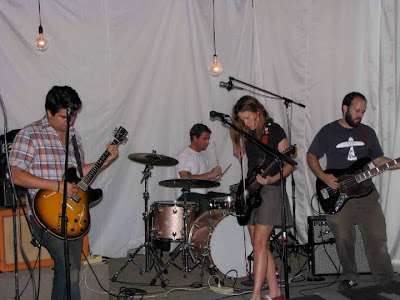 Earlier this month, The Hectors shared the bill with The Lonely Wild and Radars To The Sky for the former's Radio Free Silverlake Tuesday night residency this month. We have seen The Hectors before (at last year's "Undercovered" show), but this will be the first time we have made a post about them. Their music has been described as "smart, edgy pop" with "a sense of humor to go along with their pop chops, which is only natural when you consider the L.A. quartet has influences ranging from the syrupy to Fugazi."

Tonight's setlist was mostly new songs, including "Your Favorite Year" (read the story behind the song here)and has been described as "swing[ing] in orbit around more than just a few of the band’s favorite years, spinning as it does from the lovely gauze-pop of late-’80s 4AD to the meticulously ‘gazed Creation Records crunch of the early ’90s to the sprightly indie rock and pop of the last decade–essentially, a three-and-a-half minute love letter to some of dream pop’s best and more ear-pleasing elements." Whew. Fun show, and we are definitely looking forward to their upcoming full-length album.

Email ThisBlogThis!Share to TwitterShare to FacebookShare to Pinterest
Labels: LaBrie's, Radars To The Sky, The Hectors, The Lonely Wild