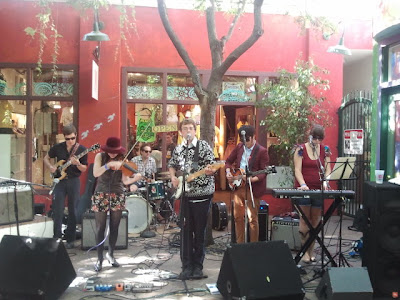 Part three in a series.

Continuing on with our coverage of this year's installment of Make Music Pasadena, up now is Judson (among who's members are familiar faces John Seasons and Jillinda Palmer) Judson is the brainchild of    Judson McKinney, who has performed in Los Angeles under at least of couple of incarnations (with his wife Mary, they released In the hands of the sun as "Judson and Mary") Judson's music has been described as "folk-tinged songwriting  reflect all the restlessness and romance of driving a van cross-country" and their live shows as "back[ing] his image-heavy songs with a full band, complete with violins and alternating electric and acoustic guitar work, and the combination has made him one of the more compelling live acts around" - which was in evidence in this afternoon performance, which we considered one of the highlights of the festival overall. Most of today's set was taken from their December 2011 full-length release Drink the Wine.

For our L.A. readers, Judson is performing tonight at the Troubadour, along with Tenlons Fort and Torches.


People Grow Up So Slow
Picture of a Child at Heart
Sweet Autumn Headlight
Tomorrow Blues
Dear Marianne
Celia
When You Wake Up
???