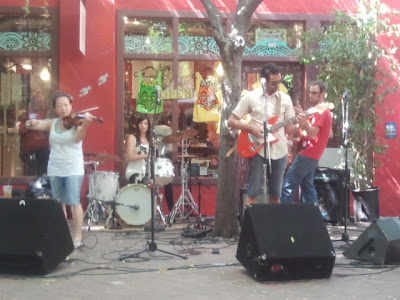 Part two in a series.

Continuing in our coverage of last weekend's annual installment of Make Music Pasadena, we move along to One Trick Pony, who performed in the middle of the afternoon. It's been quite awhile since we've caught One Trick Pony (outside of last year's tribute to "The Movies" and Undercovered III earlier this year), but this show did not disappoint. Since the former however, the band has released their first full-length album Try Not To Worry So Much, which has been described as "deliver[ing] sharp lyrics and soft melodic vocals paired with louder instrumentation."  So, enjoy this show, which may contain references to a dead cat and forgotten merch. Sorry, no setlist.