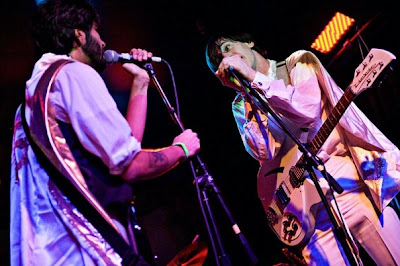 Last week, The Monolators took part in a showed billed as a pre-Halloween concert that featured four well-known Los Angeles indie bands performing as four different bands from the past. For this occasion, The Monolators took on the material of the Swedish pop hit makers ABBA. Being no stranger to either ABBA or The Monolator's music, I was curious to see and hear how this would be pulled off.

I have to confess I have a sort of love/hate relationship with ABBA. The only real reason I'm somewhat familiar with their catalog is because I've either heard them on the radio, or was forced to listen to them on car trips when I was much younger. Heck, the only reason I saw the film version of Mamma Mia! was because Dominic Cooper had a supporting role in it (and after sitting through the entire thing, I was convinced I was almost scarred for life) It's not that I think ABBA is bad or anything - they simply aren't everyone's cup of tea (and if I hear their music too long I go stir crazy)

Anyway, The Monolators delivered a short but good set of their take of some of ABBA's greatest hits. A definite highlight was their version of "Dancing Queen," interjected with The Monolator's traditional punk/garage rock style. "Fernando," "The Winner Takes It All," and "Take A Chance On Me" stayed near the confines of their providence as ballads, but stepped into rock territory.

In interest of full disclosure, "Dancing Queen" contained a few popping sounds, but they were minimized in post-production.

FLAC (lossless) files available upon request (by e-mail)
Posted by Recording LA at 10:49 AM

Email ThisBlogThis!Share to TwitterShare to FacebookShare to Pinterest
Labels: ABBA, The Echo, The Monolators