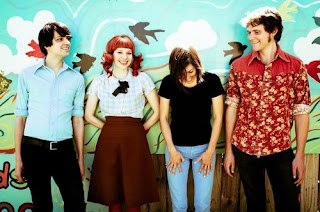 Last month, Tele Novella made a couple of stops on their debut tour in Los Angeles - the second of which was in at the Bootleg Theater in the heart of Los Angeles. Tele Novella is the brainchild of Natalie Ribbons, of the recently and dearly departed Agent Ribbons. While were big fans of and will greatly miss Agent Ribbons, Tele Novella will neatly fill the void.

While it would be tempting to compare Tele Novella to Agent Ribbons, it would not only be the easy way out, but somewhat inaccurate. Tele Novella, by virtue of being a four-piece (vs. Agent Ribbon's usual two) has a darker sound, which conjures up images of victorian gothic horror with tinges of 60's folk/swing thrown in. So enjoy this show, which was not only their tenth live performance ever, but included such highlights as the story of the "flying (guitar) space case" and the performance of a song that was based on a poem/lyrics from a man that ran a record label in Texas in the 1960's (track 5) Setlist below:

No Excalibur
Don't Be A Stranger
Victorian Terrarium
?
? "God Bless You Linda"
?
?
Hair of the Dog
Coattail Rider 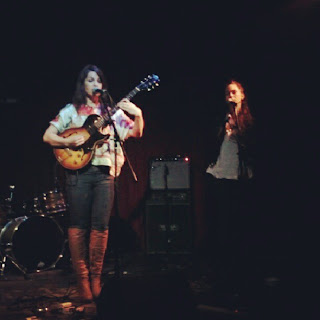 Last weekend, Jesca Hoop was back in town and graced us with her presence at her old stomping grounds of the Hotel Cafe in Hollywood. As Jesca has been a resident of Manchester for awhile now, a sighting of her in the states has become a rarer one - on this outing, she was here for SXSW besides this Los Angeles stop. And what a show it was - along with a selection of songs that spanning her catalog (including the newbie "Songs of Old"), if you've been dying to hear Jesca utter "fuck da police," your wish has been granted. Guests that joined Jesca onstage were longtime collaborator Nicole Eva Emery on backing vocals, and Blake Mills on guitar for "The House That Jack Built." Full setlist below:

Full show can be downloaded or streamed here.

Posted by Recording LA at 10:07 PM No comments: 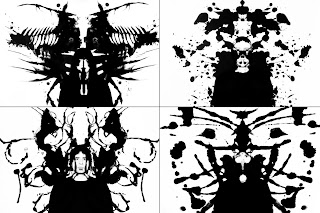 This past Thursday night, Little Red Lung appeared at the The Hotel Cafe in Hollywood playing a set that saw the debut of several new songs that will be part of their upcoming, first full-length album. It's been awhile since we've seen Little Red Lung, having been big fans and covering them on here before, and tonight's show did not disappoint. The Hotel Cafe's surrounding atmosphere and backdrop was the perfect setting to see Little Red Lung play in, and ff these new songs are any indication, the album will be a must-listen. Setlist below:

Hello all - I'm here to interrupt your irregularly-scheduled programming with a more reflective post (vs. one that's usually more content-based)

Last night I went to a show. This act isn't so unusual of itself, save for the fact that I haven't been to one since  The Henry Clay People's last NYE extravaganza many weeks back - talk about falling show attendance  It was Little Red Lung and Pam Shaffer  (the later celebrating a new record release) at the Hotel Cafe. I sat with Brad Roberts of Feed Your Head fame. It was a good show. Hotel Cafe has changed a lot of the years - I've been going there on and off since August of 2003 (!) Granted, the world keeps progressing on, and change is a natural factor of that, but...which brings me to another reason why I'm making this entry.

This morning, The 704 made a post celebrating his blog's anniversary, and how admittedly his online abode "is effectively dead, and has been for a while." I know the feeling - my own updates have been few and far between. Life and other things get in the way, it happens. Other activities take priority. However, this paragraph jumped out at me:

"Death to Anders no longer exists. Pizza! and Big Whup no longer exist. One Trick Pony no longer exists. Red Cortez, Mississippi Man, the Deadly Syndrome. The 60 Watt Kid diaspora has grown to include N O W, Skyline Drive, Pageants. Future Ghost is Missing Teen. Some variation of the Union Line has become Mt. Ossa. Johnny left Seasons. Manhattan Murder Mystery has six members. Who knows what's happening with the Monolators and the Henry Clay People. Joey Siara now plays rousing rock and roll anthems solo to rooms full of the staid and the polite. Web in Front no longer exists. Mouse is married. Time keeps doing that weird thing it does: passing."

First of all, I had no idea One Trick Pony had disbanded. It seems like yesterday I saw them at last year's edition of Make Music Pasadena. Talk about being out of the loop. But I digress...

Last night's show was very good. Great new stuff from Little Red Lung. But - and this is more about me than the music - something felt off, and has been awhile. Going to shows isn't as fun as it used to. There doesn't seem to be much to get excited about as in years past, that a certain spark is missing. Granted, I go to a lot of concerts alone, and that takes it's toll after awhile, but...I don't know. Maybe it's prolonged burn-out after going to see so much for such a long time? A normal part of the aging process?

Regardless, there will be upcoming posts on the sets from last night, hopefully sooner than later. A Jesca Hoop show should be on the horizon in the near future. If I decide to shell out the cash for Bat For Lashes, that too. Beyond that, who knows...


Posted by Recording LA at 5:43 PM No comments: 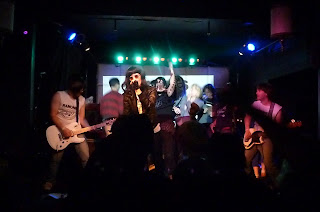 In our final post on Otik Record's Halloween Covers Night at The Echo (which also featured Haunted Summer "as Animal Collective" and The Monolators "as the Bee Gees"), Sara Radle & The Mockingbirds took the stage with a set of Ramones covers. Sara Radle is a solo artist in her own right, and was a member of the band The Rentals as well as lending vocal talent to recent Walking Sleep efforts. This was a fun set, and a unique take on the Ramones brand. Setlist below:

Posted by Recording LA at 11:57 PM No comments: