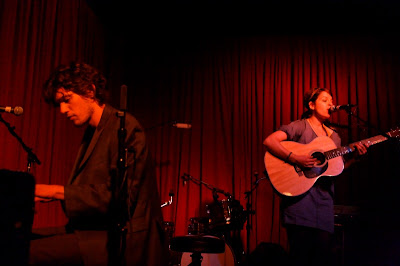 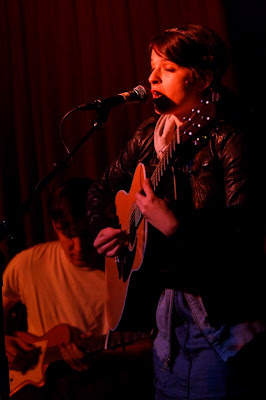 The second of four "farewell" April residency shows at The Hotel Cafe. As previously noted, Jesca Hoop is performing these shows as sort of a "goodbye" to Los Angeles before she moves to Manchester, England; and as a retrospective of her career of sorts.

The latter was well in evidence this night; as well as having Blake Mills accompany on guitar, Sasha Smith played piano on a couple of songs as well. I remember him playing shows with her a lot back in 2006/2007 (and part of 2005 as well), so it was a bit of a trip down memory lane so to speak.

The setlist was a bit of a varied one - some old, some new, and some newer. The aforementioned songs with Sasha Smith ("City Bird" and "Song For Ember") were a couple of never-released older tunes; the latter giving a nod to Jesca's ties to the city of Los Angeles. "Whispering Light" and "Murder Of Birds" are of a newer era, and according to Jesca may be on a future album. Oddly enough, only one song from Kismet was played ("Love and Love Again").

However, it's the more recent material that I found somewhat surprising. These songs (currently not sure of titles) almost suggest that Ms. Hoop may be heading for an "alternative rock" sort of sound - especially with "For/Four Dreams" (need to confirm title), which starts with "Come and bring your stereo". While these songs were played acoustically, you could definitely hear the rock edge peaking out.

As of press time, there is only one show left before she leaves the U.S., so if you're reading this - go.

As always, more Jesca Hoop shows can be found here.