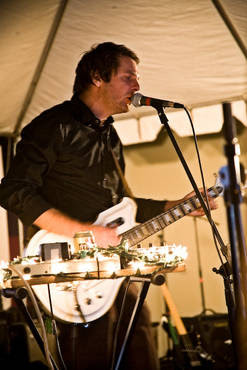 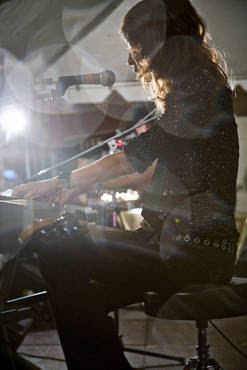 Earlimart is a long-established band in Los Angeles, and when I heard they were part of the already-stellar line-up of the 10th Annual Eagle Rock Music Festival (an amazing free music and community festival held every year during the beginning of October on Colorado Blvd. in the Eagle Rock neighborhood), I was definitely intrigued. I didn't really know much about them, but having heard many good things, I was curious to see them perform, and certainly a free show seemed like the best time to do so.

Their set was short, but a good, culling songs mostly from their latest 2008 release Hymm and Her. It was raining a little bit that night and while they were playing, plus they were cut for time due to the stage schedule running over and equipment. Overall, it was a nice little show, and a good introduction to the band for those unfamiliar with them.

Interestingly enough, when I first torrented this show, a commenter remarked wondering why after being "on the scene" for ten years, why were they playing on the "Emerging Stage." Well, good question - I don't know either. Any theories? Odd placement perhaps?

Earlimart was recently approved for uploads on the Live Music Archive, and (at this time) a couple more live recordings of them can be found here.