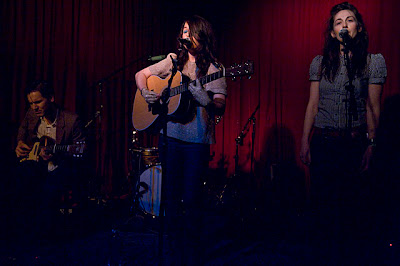 I was first introduced to (and basically first heard of) Jesca Hoop in early 2005, when The Ditty Bops opened for her at the now-shuttered Tangier's Restaurant. (which can be found here) I found it to be a good show, but I will admit it took me awhile to really "warm up" to her music (even though I continued to attend some of her shows)

I had not seen/recorded Jesca since July 2007 (when she opened for The Ditty Bops at The Fonda) Well, that's not technically true - I tried to see and record her at the Earth Day Festival in Topanga Canyon last year, but experienced battery failure. Anyway, when I heard Jesca was moving to Manchester, and that her four April residency shows at The Hotel Cafe may be her last in the U.S. for awhile, I knew I had to go.

For this show, Jesca was accompanied by Blake Mills on guitar (I know he's been performing with her for awhile, but this my first time seeing him with her) and Nicole Eva Emery on back-up vocals (also has been performing with her for some time, but again, I hadn't seen her with Jesca) I've seen Ms. Hoop in a variety of incarnations, from solo to full band to with just Sasha Smith on piano to with just The Ditty Bops on back-up vocals, and I've never been able to pick a favorite - they're all good in their own way.

This nights set focused a lot of Jesca's 2007 full-length debut album Kismet, with a couple of a newer songs "Murder Of Birds" and "My Boo," along with older, yet-unreleased "Whispering Light" For this entire residency, Ms. Hoop has promised to try to showcase "five years worth of material/performing in Los Angeles," so it will be interesting to see (as of press time) what the remaining shows bring.