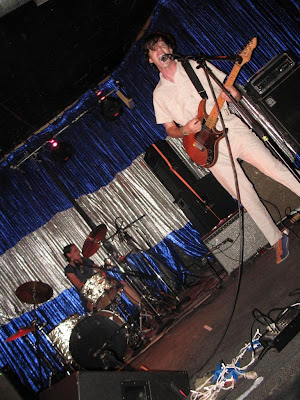 (Update: Track 4 has a name. Thanks commenter!)

Earlier this week, The Monolators shared the bill with Summer Darling on the 3rd night of their latter's Monday night residency at Spaceland. This was a special show because they are going on hiatus and will be the last one for awhile (until they release their upcoming double EP in the fall), and a unique show because they performed as a 4-piece (because one of their band members sustained injuries in an bicycle accident) Oddly enough, this show is a milestone of sorts for this blog as well - while we have featured The Monolators acoustically, doing an all ABBA cover set, and in other collaborations (Cobra Lilies, When Captain Geech Met Teardrop), and even being covered by other bands - we have never gotten a regular full-band show of theirs, until now.

Tonight's setlist covered the gauntlet of The Monolators' catalog - one song from 2004's Rejection Set Me Free ("Summertime In My Car" - which was played as a nod to band-in-residency Summer Darling), a couple from 2006's Our Tears Have Wings, one from the 2007 EP You Look Good On The Train, one from 2008's LP Don't Dance, and a few from the previously-mentioned upcoming double EP. It was a very fun show, culminating in several audience/other band members joining them onstage as a collaborative "human glockenspiel" for "Let's Be Best Friends In Space." This performance should serve as a holdover until The Monolators return to the stage in the near future.

More pictures of the show can be found on LAist.