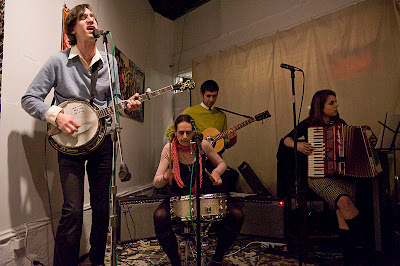 A lot has been said and written about Monolators. I first heard and saw them in April 2007 while at Mr. T's Bowl to see Ema and the Ghosts, also for the first time. This is the perfect example of how interconnected the local music scene is, because Ema is part of The Monolators side project band and has covered one of The Monolator's songs "Prom Queen."

I also saw them again on one of the stages at the annual Eagle Rock Music Festival in 2007, although quite by accident. It was a really good set, and I'm kicking myself for not recording it (since I didn't plan on seeing them) So, as a perfect example of my somewhat recent sporatic show attendance in recent years, I didn't see them again until this show.

This was a very unique show for The Monolators, because it was an acoustic one, and this was their first time doing so. Nested in front corner of the gallery, they played a short set of re-arranged material plucked from their catalog. It was an interesting show, and hopefully they'll do another one in the future.

A note on the quality of the recording - I have to admit this was a challenging environment to record in, and this is reflected on here. There is some background chatter (especially in the last couple of songs) Don't let that stop you - it's still certainly worth the download.

Finally, this Friday is the last night for "Exposure: A Photography Show," a show featuring the work of 3 L.A.-based music photographers. Since a billion other blogs have been writing about the exhibit, I will only say that it's most certainly worth going after appreciating their work for all this time, and for the great musical line-up. See you there. 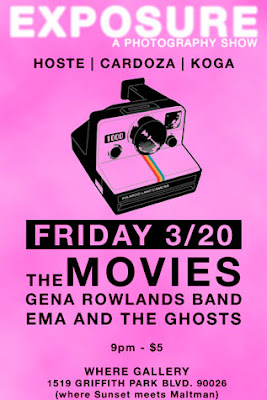 Email ThisBlogThis!Share to TwitterShare to FacebookShare to Pinterest
Labels: Ema and the Ghosts, Exposure, The Monolators, Where Gallery