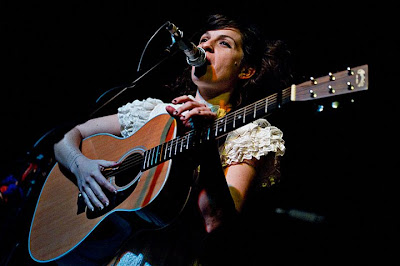 Last week, Jesca Hoop made a now-rare appearance at the Hotel Cafe in Hollywood. Before moving to Manchester (U.K.), it used to be possible to see her on a fairly regular basis at places such as the Hotel Cafe - now, while they are less frequent, that only serves to make them more special. Granted, it's been awhile since we have posted about Ms. Hoop on here (we covered her entire "farewell" April 2009 residency at the same venue), so it was a bit of a momentous occasion.

Backed by a full band, the setlist leaned heavily towards her second LP Hunting My Dress (released last year in the U.S.), with a couple of songs from the first one Kismet. The audience was also treated to a preview of some new material - two songs ("The House That Jack Built" and "Born To") were performed for the first time ever; although, it's not clear whether the latter song is meant to be a homage (or have a connection to) the similarly-named Mother Goose rhyme "This Is the House Jack Built." Additionally, we also heard a newer song "Food At Your House," with Ms. Hoop's long-time friends and collaborators The Ditty Bops.

For all Jesca Hoop fans, this show is a must-have.